PATRICK DUEGAW (b. 1966) opened solo gallery exhibitions in the winter of 2014 and spring of 2015, at the Leedy-Voulkos Art Center and the Lawrence Art Center, respectively.  A large-scale solo exhibition at the Ulrich Museum of Art is scheduled for spring and summer of 2017.  His last major museum exhibition, Inadvertent Arson, atThe Marianna Kistler Beach Museum of Art opened on October 5th, 2012, and Duegaw participated, with Paul Mahder Gallery, in the 2013 ArtPad SF.  Recent past group exhibitions include Face to Face, Wall to Wall, at the Yellowstone Museum of Art in spring of 2014, and Forty Years/Forty Stories at the Ulrich Museum of Art, in spring and summer of 2014.  His work was featured in 2011, in FH:21:  a major exhibition at the Ulrich Museum of Art, celebrating the twenty-first anniversary of Fisch Haus.  Duegaw’s first solo museum exhibition, The Builder, Removed, a comprehensive retrospective of 111 paintings and drawings, was held at the Wichita Art Museum in the spring of 2009.  The last gallery production of Jurgen and The Wrong Tools, a Still Play installation, opened in June of 2011 at the Paul Mahder Gallery in San Francisco, and also at the LA Art Show in January earlier that year. The Still Play The Wrong Tools (For The Job), opened at the Leedy-Voulkos Art Center in April 2010.  Duegaw has had seven large-scale solo multi-media exhibitions at Fisch Haus, regularly exhibits in galleries in both Kansas City and San Francisco, and has been invited to participate in national group shows such as the Kansas Masters Invitational, and the Kansas Governor’s Ball/Inauguration Exhibition, both held in 2007.

The Painted Theatre Project, Patrick Duegaw’s current body of work, reinterprets both painting and the basic rules of dramatic construction.  The Project is an on-going documentary that is part installation piece, part theatre production, where, in place of thespians, objects, and a stage, it instead features painted cast, props, and sets. The action that takes place is rendered to imply movement, rather than actually performed, and the dialog is written rather than spoken. These static-theatre productions have grown out of his wide range of experiences, from the construction site to the stage, and as a painter in his studios both at the Fisch Haus and in Montréal, Québec.

Awards:  The Kansas Arts Commission (KAC) awarded Duegaw a Collaboration Grant (in conjunction with the Ulrich Museum) in 2010, named him the runner-up for the Governor's award in 2010, and awarded him the Fellowship for painting in 2006.  He also received a Purchase Award from the Wichita Art Museum in 2004, the Ulrich Museum’s Betty and Frank Brosius Award in 2001, and the KAC Mini Fellowship in 1992. His work has been placed in many private, corporate, and institutional collections, including the Ulrich Museum of Contemporary Art, Wichita Art Museum, the Kansas Health Foundation, and the Emprise Bank Collection; reviewed in Art In America, The Kansas City Pitch, and Review magazines; and appeared in New American Paintings, as well as Studio Visit.  From July 2005 to August 2006, Duegaw was highlighted in the Portrait of an Artist Campaign, an on-line journal project of the Smithsonian National Portrait Gallery, Washington, D.C.

Fisch Haus:  Duegaw co-founded an art organization called Fisch Haus in 1990.  Fisch Haus, originally conceived as a series of hit-and-run exhibition/performance events that transformed abandoned spaces in downtown Wichita, Kansas into art happenings, has now become one of the leading cultural movements in the State. Dr. Emily Stamey, Ulrich Museum Curator of Modern and Contemporary Art describes these early events in an essay written for the Ulrich Museum exhibition's award winning catalog of Fisch Haus 21: An Artists' Collaborative Comes Of Age:
"For more than two decades now, the arts in Wichita, Kansas have been enriched by the efforts of four [artists] who dedicate themselves to making art and creating a rich and ever-expanding circle of artists and arts enthusiasts...Then interim director at the Kemper Museum of Contemporary Art in Kansas City, art historian Henry Adams was taken aback by the phenomenon of a Fisch opening and the large crowd that it drew. Decades later, he recalls: 'What impressed me was that Fisch Haus was a truly populist venture and seemed to be really adding life to the community.' These were not traditional art openings characterized by polite chatter, dainty finger foods, and cocktail sipping. These were events that flew in the face of local expectations and drew ever-larger crowds."

Since purchasing a building  in 1994 on Commerce St., an alley running behind a line of early twentieth century warehouses in downtown Wichita,  Fisch Haus, while still artist-run and grass-roots based, has established itself as a influential facility respected for its commitment to original and diverse programming.  The 21,000 s.f. building contains studio and gallery space, a full wood and metal shop, an indoor amphitheater, and a print studio, all designed and built by Duegaw and his three co-founding partners.  Fisch Haus, including Duegaw's home and studio, was featured in the October 2011 issue of Dwell Magazine, in an article focusing on the revitalization of Wichita's cultural identity;  attributing it, in a large part, to the emergence of the Commerce St. Art District, an initiative spearheaded by Fisch Haus. The collaborative produces several large-scale shows annually, and hosts numerous community art events throughout the rest of the year, most all of which are offered free of charge and are open to all ages.  In 2004, Fisch Haus formed a not-for-profit 501(c)(3) corporation under the name Fisch Bowl, Inc.  Dr. Stamey elaborates:
"The Fisch Haus community remains an energizing phenomenon in Wichita and its example has inspired a host of other galleries and arts venues to establish themselves in the city’s downtown. Once an outpost on an abandoned row of warehouses, Fisch Haus is now the cornerstone of the city’s Commerce Street Art District. No longer a space for displaying just artworks by the founding members, Fisch Haus now regularly hosts a multidisciplinary roster of regional, national, and international artists, musicians, dancers, theater performers, and lecturers."

Montréal:  Eight years after founding Fisch Haus, Duegaw became interested in the vibrant cultural fabric of Montréal, Québec, and made his first visit the following summer of 1999, building a studio space and beginning to forge relationships within the city.  He has returned every summer since then, and established studios in several different neighborhoods.  Many of Duegaw's major works in the last decade were completed in his studio at 24 Mont-Royal, in a space previously utilized by internationally-renowned Montreal artist Jean-Paul Riopelle.  Montréal, and the unique milieu of French Canada, have informed much of his work, particularly an exhibition in 2005 entitled ‘Juste Pour Rire’ that was inspired by the characteristically Québecois annual festival that bears the same name. 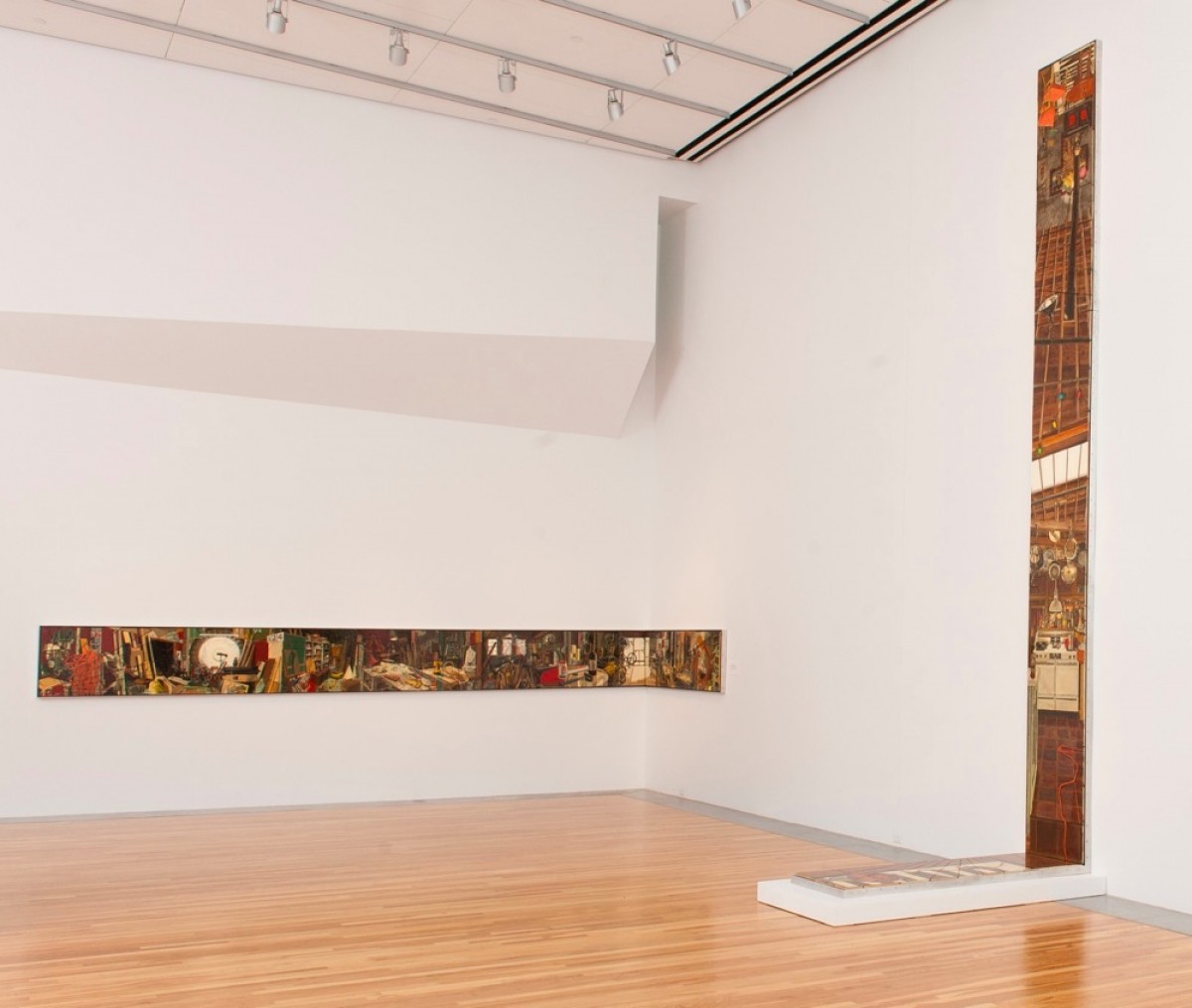